The new Ed Paschke Art Center opened on what would have been Paschke’s 75th birthday in Jefferson park on Sunday, June 22, 2014. I met one of my very first students for the event, Chauncey, as well as two of my girlfriends, Rachel and Dora. 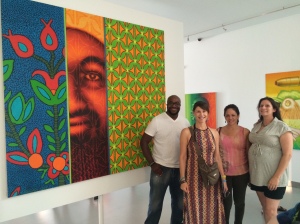 Chauncey and I arrived first and did not wait for the others to begin our exploration of the place. The Center is a remarkable space.  There is an impressive gallery of work as you walk in and downstairs is a studio for artists in residence.  We found some work inspired by Paschke, there, created by high school kids. (New lesson plan now in the works to do the same.)

My favorite piece in the main gallery is a large painting that features an image of Osama Bin Laden flanked by two beautiful decorative prints that  remind me of Muslim prayer rugs.  Any image of Bin Laden provokes emotion from within and this is no exception.  Bin Laden’s face glows golden and his partial smile along with the soft way that Paschke paints gives him a friendly look that I know deep down is deceiving. I want to believe this man had a heart and if you didn’t see buildings falling with people leaping to their death as a result of his hand you would find the painting nothing more than another gorgeous work by Paschke.  Chauncey and I remarked how fine Paschke’s painting skills were.  I had always believed he used printmaking in his work but he didn’t.  Look sideways at some of his paintings and you will see how he used glazes to add another,more subtle,layer of pattern on top of his brightly colored portraits.

When Dora and Rachel arrived we went upstairs to see where Paschke’s art studio was recreated.  I loved this.  A man next to me remarked how he loved to see how other artists organized their space and I agreed.  Paschke’s brushes were arranged in old PikNik  potato sticks and Pringles cylinders, Sanka cans and old coffee mugs.   A photo of the boxer whose portrait he was working on was propped on his easel with other postcards and photos. 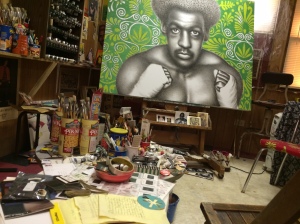 Dora and Rachel had an amusing encounter with an older woman in a room in the back of the upstairs gallery.  There are two rooms behind the recreation of Paschke’s studio with giant flat screens mounted to the wall.  It looks like, maybe, an informative video about Paschke will one day be playing here.  In one of the rooms a single podium table with an orange tablecloth draped over it stood and someone had left an empty water bottle there with a rolled up piece of paper inside it.  Dora leaned on the table and a woman came in and scolded her, “what are you doing?  Don’t touch that! It’s art!” she told her.  Rachel laughed and the woman asked why she was laughing and that’s when they knew she really thought this was an installation of some sort. “Why do you think there is a piece of paper inside there?  Do you really think someone just left it there?”  Yes, actually, someone just left their empty bottle there.  “Think about it,” she said and tapped her index finger on her temple then circled around the table admiring the bottle left by some rude person who didn’t throw away their garbage.

We took a group photo before leaving and I noticed a high school classmate close by talking to someone.  I didn’t want to interrupt his conversation but I said a hello to David Leonardis and thought to myself, “I need to put his gallery on my list of places for a meet up when I return from Greece!